Conquering fears all in a day’s work

If you think belting out pop tunes, while wearing big wigs, big costumes and big makeup and flying was challenging enough, try adding in a fear of heights to the mix.

That’s exactly what one of the Divas in Showbiz Christchurch’s Priscilla, Queen of the Desert will be working to overcome this month as the trio will spend a lot of time suspended above the stage during the show.

Jane Leonard, who plays Diva 2, used to love abseiling and rock climbing but a bad abseiling fall a couple of years ago broke her confidence with heights. However, she’s working on it. 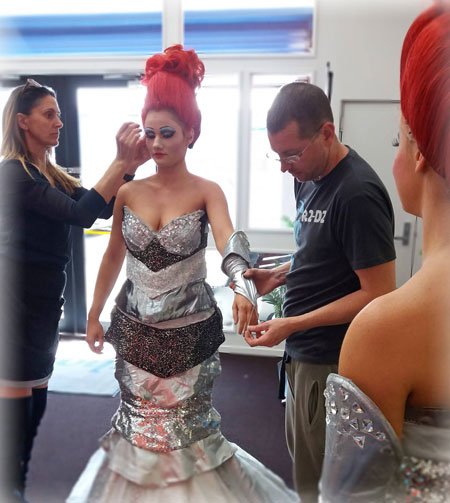 “I went to Adrenalin Forest last year and forced myself to get used to heights again. At the end of the day we knew it was in the job description so whatever previous feelings or fears I have towards heights can’t overcome the feeling of singing some banging tunes with some equally banging ladies,” Leonard says.

Showbiz Christchurch’s general manager, Michael Bayly, has assured Jane that every possible technical safety precaution is in place. “We work with the finest technical crews in New Zealand. The Divas will be safer than Lady Gaga at the Superbowl!,” says Bayly.

The three Divas provide much of the live entertainment in the stage spectacular. Without a doubt, Showbiz has chosen three of the city’s biggest vocal talents.

Leonard, Emily Burns, and Naomi Ferguson are established solo artists, but it’s the three-part harmony they create together that puts any singer at the top of their field.

Burns, who plays Diva 1, had a busy 2016 with The Court Theatre’s Mary Poppins, Showbiz’s Mamma Mia!, Poppins in Invercargill, Evita with Showbiz, and ended the year at The Court in Legally Blonde.

Although she’s keeping a tight lid on her plans for 2017 with a determined “Watch this space”, the naughty sparkle in her eye always tells more than she’s letting on. “I would love to give you more information, but that I can not disclose,” Burns laughs.

Some might consider that a ‘diva’ response, but secrecy and tight contracts is the business of show business.

Leonard adds, “Beyonce said, ‘Diva is the female version of the hustler’… You’ve got to do your own hustle. Hustling doesn’t need to be a negative thing. Hustling is finding your work, working towards your craft in our field. That’s your hustle.”

Leonard too had a big 2016, starting the year in Poppins, then We Will Rock You, Ben McDonald’s HMS Pinafore, kids shows at The Court, Showbiz’s Evita and ended the year in Legally Blonde. She hopes to keep the momentum going, but remains as elusive as Burns when it comes to her next project. She works as a nanny and teaches drama between acting gigs. “You audition and you may get offered a contract, but you can’t really disclose information.”

Naomi Ferguson has been a stalwart on the Canterbury music scene for many years and last appeared on stage for Showbiz 10 years ago as Grizabella in CATS. She has since started a women’s performance company, Empress Theatre Collective, which will have seasonal events this year, and appeared as Blanche DuBois in last year’s Repertory production of A Streetcar Named Desire.

Ferguson reflects on her role as Blanche while looking towards her new role as Diva 3, and says it’s a “spectrum opposite kinda role”. She says “Blanche was awesome but emotionally devastating every night, so this is more like – woohoo, party! And I get to hang out with these two cool ladies and make three-part harmony which is such a treat.”

And “hang out” they will. Ferguson doesn’t mind the heights the Divas will be soaring to, and says “This is just like abseiling in crazy costumes.”

Posted in Latest News, Miscellaneous, Priscilla, Queen of the Desert