The opening night of Showbiz Christchurch’s current production, Les Misérables, as per their usual practice was a treat for the senses. Stunning scenery combined with gorgeous costumes and excellent hair and make-up within the beautiful surrounds of the Isaac Theatre Royal. The singing and live orchestral accompaniment really makes you feel immersed in the story in a way that watching a movie just can’t rival. There is magic when you attend a live musical theatre performance, it heightens the enjoyment when you know that you are experiencing an incredibly well rehearsed but ultimately unique performance. 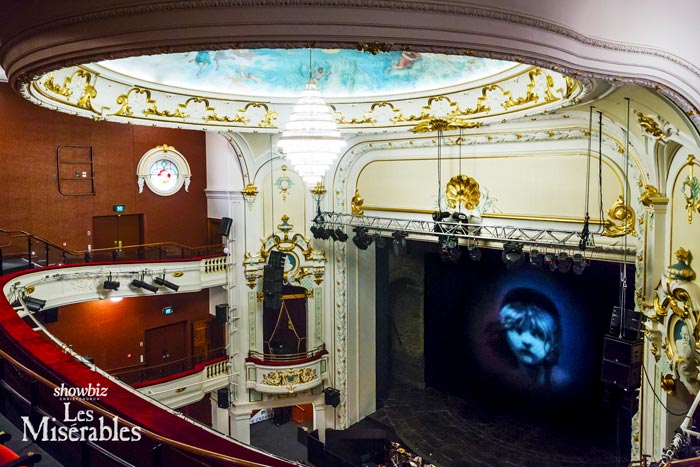 If like me you haven’t seen Les Misérables before you may have arrived at the incorrect conclusion that it was largely a tragedy. It is not. Don’t get me wrong, there is plenty of drama, injustice, and sadness in this scathing commentary on 18th century French society. However there are also plenty of hilarious pratfalls, raunchy gags, and utterly amusing scenes in the show. For those of you that have seen Les Misérables go see it again. This complex tale of love, redemption, sacrifice, and heroism has so much depth that there will always be new layers to unwrap.  Les Misérables is a 38 year old musical, based on the 1862 Victor Hugo book of the same name, and among other social injustice issues it perfectly captures the themes of the contemporary #metoo movement. The perfectly performed song “At the End of the Day” is the best example of this. An ensemble piece which explores general aspects of poverty, but then zeros in on women in the workplace. It talks of women in subordinate roles, who can’t afford to lose their jobs, and are at the mercy of a male superior who can fire them without a second thought if his lecherous advances are refused. Sound familiar?

Onto comedic relief, which is largely provided by the two very talented performers playing despicable but somehow likeable inn-keeper Monsieur Thénardier (Ben Freeth) and his wife Madame Thénardier (Rebecca Malcolm). Blackmailing, rotten souled, scoundrels through and through they mistreat and swindle all they come in contact with, but are still relatable. The brilliant acting of the pair, but especially by Ben Freeth, kept the audience riveted on their every devious and usually suggestive or inappropriate move. 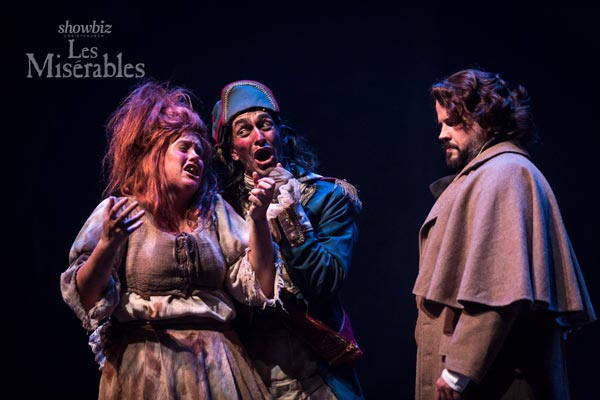 The Thénardiers played by Rebecca Malcolm and Ben Freeth, and Valjean played by Daniel Belle.

Acts of heroism, redemption, and sacrifice are also abundant, even in the face of overwhelming misery. This is a story about doing the right thing, even when you don’t have to, even when it would be easy to find justification for doing otherwise. Several times we witness on stage the characters choosing to sacrifice their comfort and personal feelings. The Ten Tenors performer Daniel Belle is a powerhouse as he plays Jean Valjean, a former prisoner who ultimately devotes his life to making good. Solo mother Fantine, is hauntingly played by Kira Josephson (she was Elphaba’s wheelchair bound sister in Showbiz’s production of Wicked earlier this year) gave literally everything she had to give her young daughter Cosette a good life. You’d have to have a pretty hard heart not to feel her pain, as she is thrown in the path of the comically made-up ladies of the night, during the sarcastically sung “Lovely Ladies”. 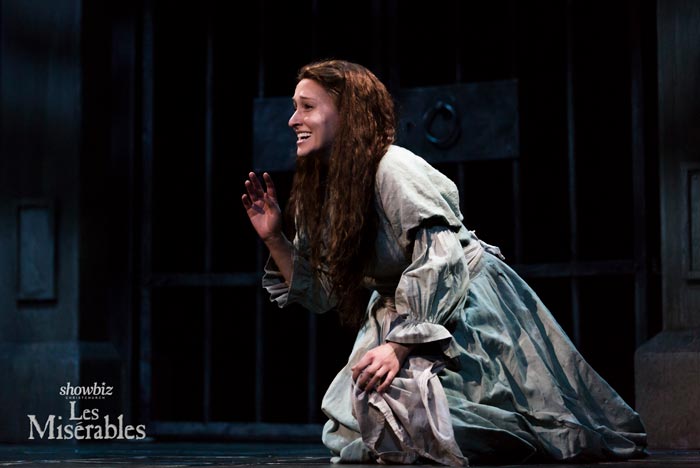 Javert, the apparent villain of the show, is played by James Foster and he delivers a solid performance. This is a character with obviously conflicting emotions who believes himself in the right by virtue of his role as enforcer of the law. It is hard to condemn him for doing what he truly believes to be the right thing, even if his actions feel wrong to modern ideals. One of the things I most enjoyed about the show was how nuanced the story is, there is no definite answer of what is right or wrong. It makes for some seriously suspenseful scenes!

The opening night child performers (they alternate through the season) in the roles of Eponine, Gavroche, and Cosette were each spot on in their own way. The challenging solo of “Castle on A Cloud” was performed by Isla Palmer as Cosette and gave me goosebumps. Her voice was positively angelic.  An optimistic sounding song, heartbreaking in the context of her miserable situation, this young lady performed with a perfect wistfulness. Gavroche actor Duncan Price on the other hand delivered a comic performance worthy of an actor three times his age. These young actors have a great future in the theatre ahead of them. 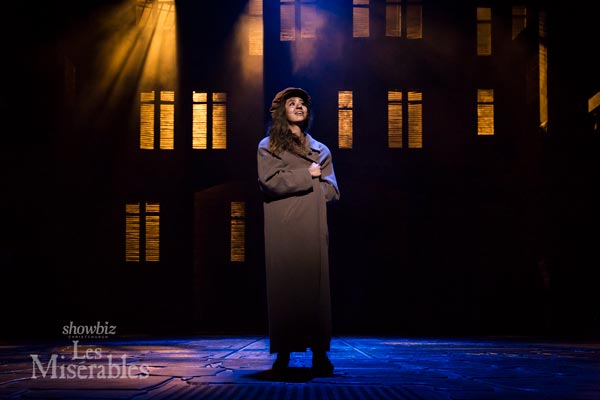 There were numerous other outstanding performers incl Eddie Redmayne look-alike Fergus Inder playing young idealistic Marius. Adult Cosette is excellently played by Jacqueline Doherty, and it is a joy to see adult Eponine so sympathetically played by Monique Clementson. Jack Fraser as Enjolras as he once again acts the revolutionary (he was Che in last year’s Showbiz production of Evita).

Aside from excellent singing, dancing, and acting the spectacle was completed by a massive portion of the stage rotating at perfectly timed intervals, adding an extra layer of urgency and perspective to many of the scenes. The set design is incredibly realistic and elaborate, a highlight for me was the barricade made of chairs, tables, doors etc that all perfectly fit together to look like the unstable jumble of a real improvised urban barricade but was instead a carefully crafted set strong enough to hold a troop of performers as they clambered all over it.

The orchestra may have been hidden in the pit, largely invisible to the eye, but it sure made its presence felt. Knowing that the singers are being accompanied live by musicians of the highest quality makes you feel rather proud of our city that we can summon up such talented individuals night after night. The depth of sound that they achieve is really immersive too and adds to the feeling of being directly involved in the story unfolding on stage. 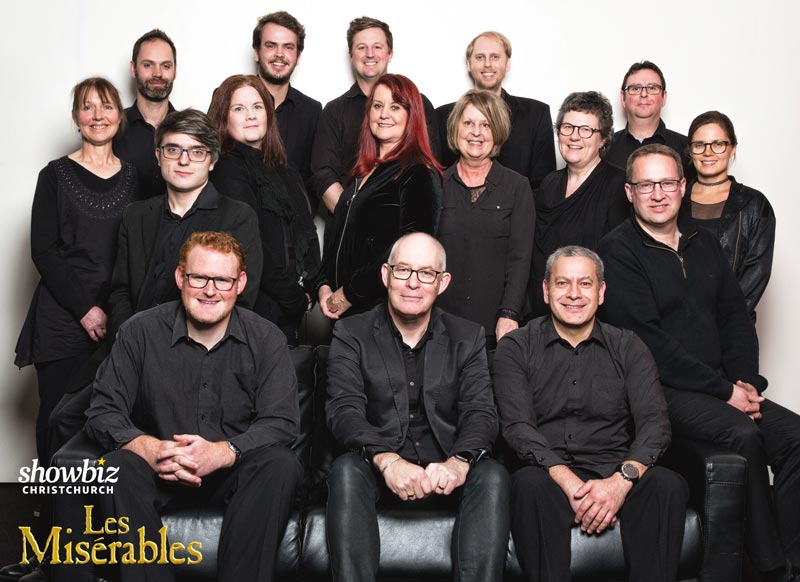 It is plain to see that the work of so many people has not been wasted on this epic musical. Everyone involved with Showbiz Christchurch, at all levels, has clearly put their utmost dedication into this production of Les Misérables and it really has paid off. I suspect that most of Christchurch will want to see this show before it finishes in early October. This is definitely a FOMO-worthy event so buy yourself some tickets now, because this show is three hours (incl intermission) of action packed adventure-drama-comedy you won’t want to miss.

All photos by Danielle Colvin Photography