Bụi đời – the dust of life 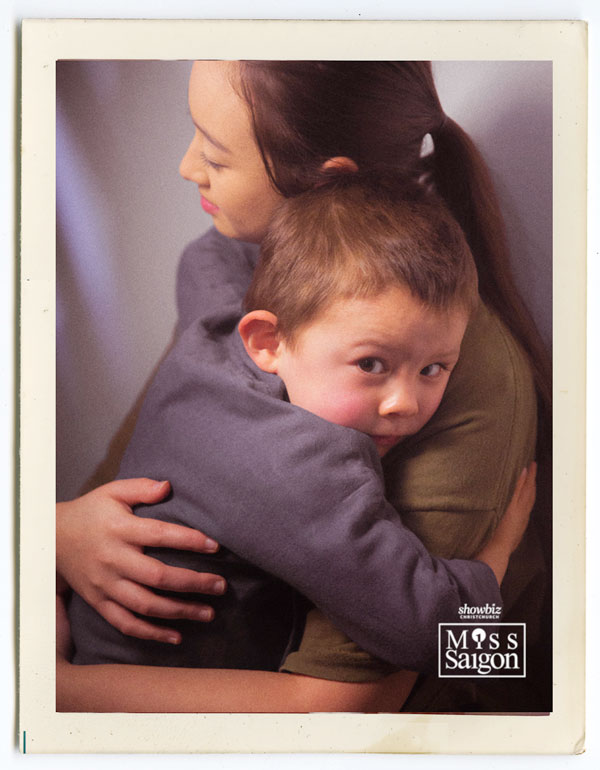 They’re called Bui-Doi
The dust of life
Conceived in Hell
And born in strife
They are the living reminder
Of all the good we failed to do
We can’t forget
Must not forget
That they are all our children, too

The children of American GIs and Vietnamese women

“Wisps of blonde can be seen bobbing and darting among the rivers of black haired women and children in the street markets.

“Round blue eyes peer out of thatched huts. Along dusty paths, some of the faces that beam up at strangers are black, others are fair-skinned.

“Contrary to some expectations, most of the mixed children have been accepted and cherished by their Vietnamese mothers and grandmothers, and many also by aunts and cousins and others in remote branches of their extended families.

“Relatively few have been totally abandoned to orphanages, and only a small number are available for adoption.

“The trouble comes outside the protective circle of the family, for when those youngsters step into the streets, enter the schools and seek new friendships, they are often met by teasing and ridicule from both adults and children.” [2]

New York Times reporter David Shipler wrote this from Saigon in 1974, the year following the signing of the Paris Peace Accords on 27 January 1974, heralding the suspension of all U.S. combat activities. The Vietnam War, as it was known in the US, had become a political hot potato. American people were protesting. Troop morale was generally low. Drug use was prevalent. In Vietnam, “drugs were more plentiful than cigarettes or chewing gum” and attempts to suppress use was “almost completely ineffective” and would come only with the withdrawal of the American troops, a US congressional report concluded in 1971. [3]

The standard length of service in Vietnam was one year. The best morale-builder of all was that soldiers could actually count the days ‘til they returned home. ­ 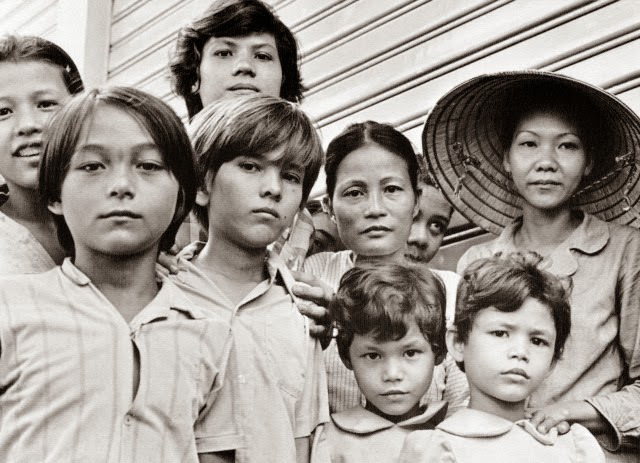 Image from: Pushing On, Bui Doi, The Dust of Life

Bụi đời– the dust of life 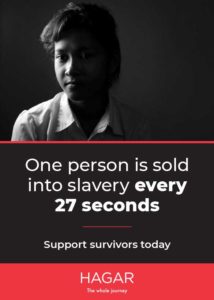 Left behind after the removal of the US troops were one million orphans who had grown up to have families – and lose them – during the war. Included were those known as Bui Doi – the dust of life. Some 8000 of these were the offspring of American GIs and Vietnamese mothers. Many were harassed, many were left to run the streets. These children were generally rejected by Vietnamese society, yet for years, Vietnam would not let them out, and America would not let them in.

“They are of mixed race in an essentially homogeneous society, without a father in a patriarchal society, reminders of what is seen as lack of morality on the part of Vietnamese women and of a time in Vietnamese history that is not exactly viewed with joy and happiness.” [4]

Estimates vary as to exactly how many ‘Amerasian’ children there were in Vietnam. “The US Government has alluded to about 8,000, while the Vietnamese say there are in excess of 10,000, maybe up to 15,000,” said human rights lawyer Sanford Mevorah in 1985. At the time, only 131 had made it to the US.

“The US and Vietnam had agreed that the children, born of American servicemen and Vietnamese women during the Vietnam War, were a US responsibility, but the lack of diplomatic relations between the two countries meant there was no machinery to bring them to the US.” [4]

Saigon. In the An-Loi area of the town more than 15.000 refugees were housed including Eurasian and Afr-Asian orphans left behind by the departing of US army. Source: Magnum Photos.

The illegitimate ‘negro-fathered’ children were doubly disadvantaged. New Zealand paediatrician Dr. Margaret Neave worked for the Save The Children Fund with the NZ surgical team in Vietnam, based at the Qui Nhon hospital in South Vietnam.

When asked about their future, she spoke plainly:

“Their future? None I can see.

“At the moment, most are protected in orphanages. But later on . . . well, they won’t get jobs. Discrimination, you know.

“The Vietnamese are disgusted by them.”

Dr. Neave estimated there were “some thousands” of these children throughout Vietnam – most of them left behind in moves to adopt orphans. She did not criticise the Vietnamese attitude towards these children, and said, “You need a few generations of food in your belly to afford generosity.” [5]

One former Vũng Tàu bar girl had three half-black children by three different GIs. The soldiers have all gone home, but she has “no regrets” she said, “Because at the time I

“It was a happy life. A house to live in, you like with one American, that American gave you money and bought you things. With all that money it is you who made the decision to work that way or not. And if you happen to have a baby because you’re not careful, that’s your bad luck”. [6]

Generally speaking, the different children, the half-white as well as the half-black, were “doomed to ostracism.”

“But, of course, it is worse for the Afro-Asian children. Like many other people, the Vietnamese are very conscious of colour,” Mcrovah said in a 1985 interview, appealing to the United Nations for help to break the political impasse that existed preventing ‘Amerasian’ children from being brought to the United States from Vietnam.

“They consider dark skin undesirable, associating it with the Moi, or savages, the tribal people who occupy their mountainous rain-forest country. To them, light skin colour – as long as it is without the taint of foreignness – is highly prized.” 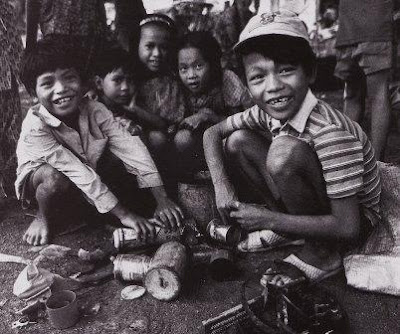 Image from The Hairy Cow blogspot: Bui Doi – the Dust of Life

It wasn’t just the Americans who had left their mark on a generation of Vietnamese children.

“In 1954, when the French military forces withdrew in defeat from Indo-China, they left behind an estimated 10,000 illegitimate Eurasian children and a scattering of Afro-Asians in Vietnam alone.

“By the end of 1967, nearly 4000 of these children were repatriated to France under that Government’s policy of recognising citizenship regardless of legitimacy”.

“Saigon’s streets, as well as the streets of Da Nang, Tuy Hoa, Bien Hoa, Vung Tau, and other cities occupied by foreign troops in Vietnam, are crowded with homeless children who beg, shine shoes, pimp, sell themselves, wait around for a chance to steal.

“These boys and girls have nothing, and nobody cares. Cuts, scratches, and abrasions on their dirty bodies become infected and scarred. Their flimsy cotton shirts and shorts go from dirty to filthy, and then rot into tatters until the children beg or steal money to replace them.”

”As the illegitimate boys of Vietnam have little choice but to beg or steal, so the girls mostly become prostitutes.” [7] 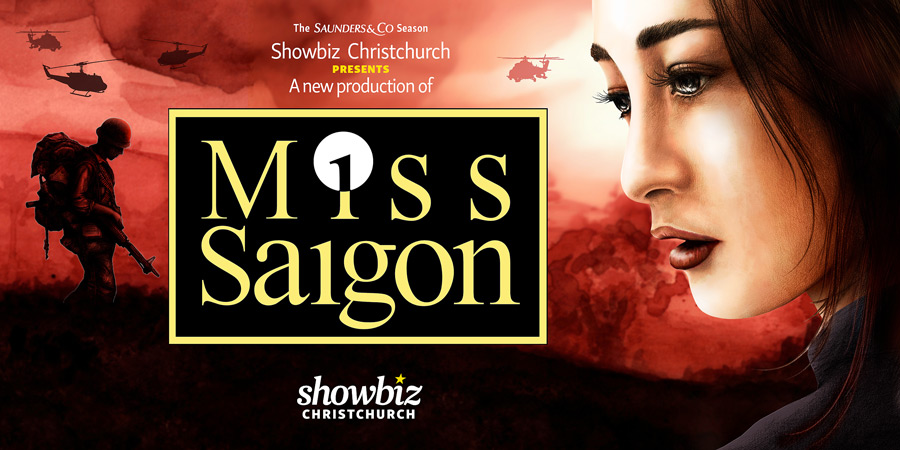