Miss Saigon – the refugee story that still needs to be heard

Miss Saigon starts in 1975 at the very end of American involvement in the Vietnam conflict, the Fall of Saigon. If, like me, you go to see Miss Saigon with a preconceived idea of the show, prepare to have your expectations delightfully challenged. I had read and heard a lot about both the show itself and the history that inspired it. There are certainly some aspects of this, originally groundbreaking show, that can now be seen as problematic. However, Showbiz Christchurch’s production of it firmly addresses issues that a decade ago, when they last performed it, would not have been considered. One of the most valuable contributions to this show I’ve seen is the care and effort taken to talk with real people, refugees and veterans, who will see their own history somewhat reflected in this show. Context really is what makes Miss Saigon more than just a show, women like Kim still exist, and people continue to be displaced by war and injustice. Hagar New Zealand is an organisation that supports people who have suffered these traumas. After watching the show it was easy to see why Showbiz Christchurch have chosen to support the excellent work that Hagar does. 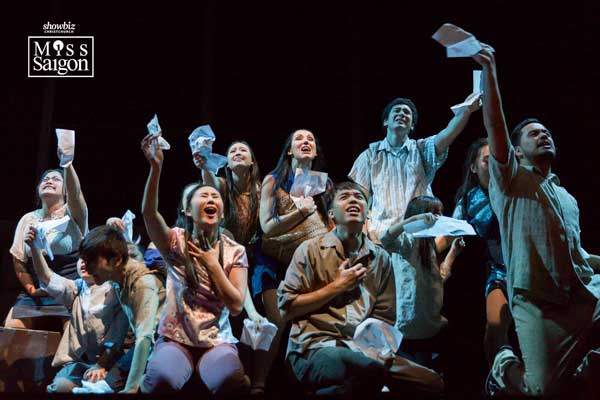 The three key roles are Kim (Tina Bergantinos-Panlilio), The Engineer (Marcus Rivera), and Chris (Jack Fraser). The amazing voices of these three lead performers propel this tragic story across the Isaac Theatre Royal. It is hard not to be drawn in. Without spoiling the plot for those who like to be surprised, the story centres around a young Vietnamese woman, Kim, who endures many of the different hardships refugees still suffer today. Orphaned and having fled her village to the big city of Saigon, she is desperate, and enters into work as a ‘bar girl’ in Saigon at “Dreamland”. On her first night as a bar girl, she meets a young American man, Chris. This meeting is to change their already chaotic lives forever. 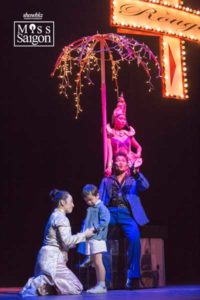 One of the aspects Tina Bergantinos-Panlilio especially brings to this role is her ability to convey both innocence and strength at the same time. Her portrayal of Kim gives a completely believable voice to thousands of authentic Vietnamese stories. Having had the privilege to hear some of the stories told to Showbiz Christchurch, by now local Vietnamese women, I can say that her Kim does them justice.

Even a sad story needs comedy for balance, in this case, it often comes from the sleazy and shady character who owns Dreamland, “The Engineer”. It’s a tribute to Marcus Rivera that he can play a character who quite often behaves as in a morally reprehensible way but still comes across as likeable, even relatable. A line from the song “Backstage at Dreamland” sums up The Engineer perfectly, “shut up and put your hot pants on”. The fact that it barely raises an eyebrow among the girls he employs ought to make you thankful to live here in our usually more enlightened society.

Chris is best summed up as what happens when young men are sent abroad into a war of questionable morality. In casting Jack Fraser Showbiz Christchurch have hit perfection, he melts into the role and adds the humanity that could otherwise be missing from this tired and warworn soldier. That’s not to mention his always fantastic voice, every word sung is perfectly clear and filled with emotion and meaning. 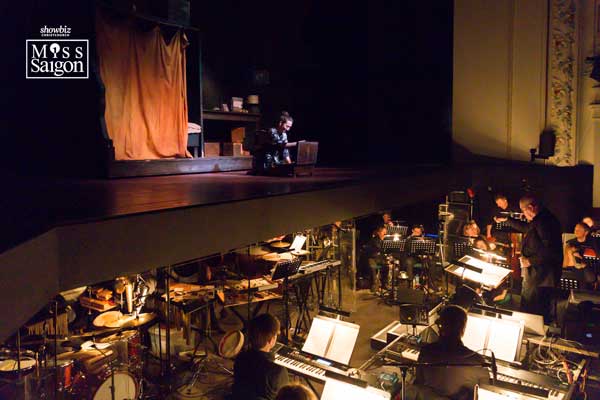 The music in Miss Saigon is as epic as you’d expect from the talented duo who also created the musical Les Misérables. Something you won’t see from your seat in the theatre, but is of particular note, is that the score is so complex and detailed as to require not one but two percussionists to produce the wide range of distinctive musical elements that make this show feel so atmospheric. One of the best parts of the whole show combines both sound and sight. This occurs in the first act as the story transitions in time from 1975 to 1978, the orchestra masterfully provides the soundtrack to a regime change, while the communist army marches across stage, faceless. It’s hard not to be awestruck by this.

The set and costumes for a show are always one of my highlights. I like to be dazzled. The costumes for Miss Saigon are beautiful and cunningly designed to be as tasteful as possible, given the constraints of characters who sometimes have to wear “hot pants”. But it was Harold Moot’s set that most caught my imagination. There were many amazing pieces but perhaps the most interesting was an enormous American flag made from flashing lights, straight out of Las Vegas. Head of Lighting Darren McKane told me after the show that each of those hundreds of bulbs was a delicate (and hot) incandescent bulb that had been carefully saved from the last production of Miss Saigon a decade ago. Go and watch the show, if only to marvel at the effort involved in just this one feat of set construction.