That is how Sarah Buchanan describes taking on the role of Showbiz Christchurch president following the resignation of Markham Lee about three weeks ago.

Having a strong association with the company since 1989, Mrs Buchanan said taking on the role is an exciting new change.

Mr Lee has served as president of Showbiz on and off since 1990 with his association with Showbiz beginning in 1973 at age 11 when he performed in Oliver!

But it isn’t the only major change to the strong musical theatre company – which has been operating since 1938.

Paul Christ will take over as general manager in January following Michael Bayly finishing in the role in mid-September.

Mr Bayly, who served as general manager since May 2015, has gone onto become the national on-premise manager at Cassels Brewing Co.

Mr Christ has a wealth of experience in musical theatre having supervised, conducted and directed productions for Disney Theatrical Productions, Cameron Mackintosh and Vienna State Opera.

He said Showbiz offers the perfect opportunity to draw on his professional musical theatre experience along with his work in commercial and not-for-profit art sectors.

“I have travelled extensively for a large part of my career . . . it was time to come home and reconnect with family and put to use that industry experience to the advantage of the New Zealand performing arts sector.” 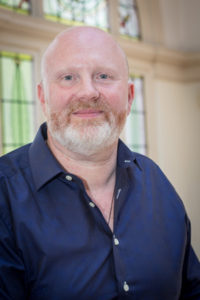 Paul Christ, the new General Manager will start on 8 January 2020.

Mrs Buchanan has a long-standing relationship with Showbiz having served as vice-president for the past five years and been on the board since 2010.

She said her role as president will be made easy due to having a “marvellous” team and board she has been able to delegate tasks to take the pressure off.

“We are really lucky we have all these exciting shows coming through from the West End and we are able to stage them here which is fantastic,” Mrs Buchanan said.

In September, Showbiz announced a dazzling season to be staged at the Isaac Theatre Royal next year starting off with My Fair Lady from April 3.

In June, the music of Chess will be staged in concert with the Christchurch Symphony Orchestra.

The final show of the year to be staged will be Buddy – The Buddy Holly Story featuring the music of American musician and singer-songwriter Buddy Holly.

Mrs Buchanan said the talent in the city is phenomenal and Showbiz has fantastic creatives who know how to put on a show.

She has led an exciting career both on and off the stage including touring as a personal dresser with English singer Elaine Paige twice.

Although she has taken on a major role at the company, Mrs Buchanan’s days in the spotlight are far from over.