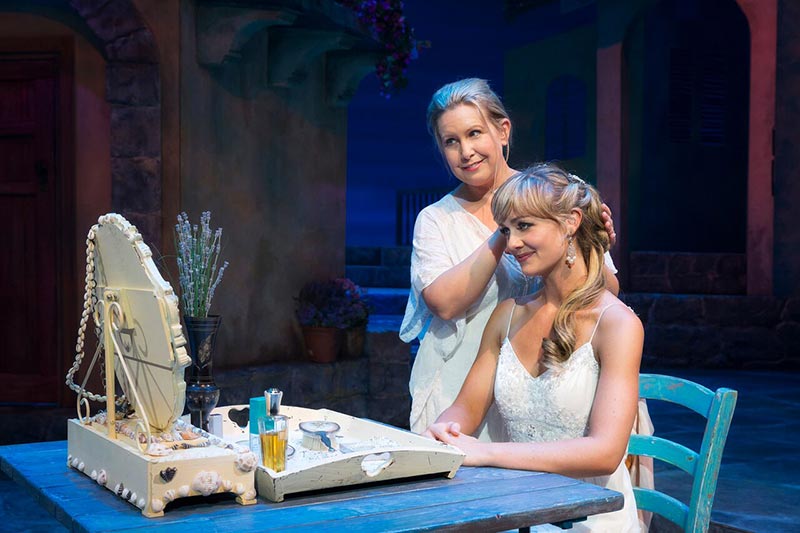 ABBA songs are indestructible. You could fire them into the sun and they would come up smiling.

Mamma Mia! is a cheerful jukebox musical built around the Swedish pop group’s most enduring and catchy songs.

Since it launched in London’s West End in 1999 it has become a global juggernaut, selling million of tickets on worldwide tours and being adapted into a hit film starring Meryl Streep in 2008.

It is easy to see why this infectiously goofy, endearing and funny show has been such a universal hit.

Showbiz’s Christchurch production of the musical at the Isaac Theatre Royal is suitably bright, colourful and sun-kissed.

And at the heart of the show are those fiendish pop songs that cannot fail to make you smile.

Sure, the tunes are gleefully and knowingly crowbarred into place around the plot, but they grin at you in a way that is hard to resist.

The story involves Sophie Sheridan (Emily Burns) preparing for her wedding to boyfriend Sky (Ben Freeth) at her mother’s taverna on an idyllic Greek island. Sophie uses the opportunity to invite three men from her mother’s past to the wedding, believing that one of them must be her father. But which one?

The Greek location is evoked with a colourful, multi-layered set backed with a large LED screen that reflects the mood of each scene with an ever-changing sky. The versatile screen conjures a red sunset for passionate scenes, a rising moon for the romantic finale and a rising sun for the hopeful day of the wedding.

The costumes are similarly colourful, adding flair to the tightly choreographed and energetic group dance numbers.

Juliet Reynolds Midgley is a standout as the central mother figure, Donna, excelling in the quieter and more emotional songs in the second act. Matt Pike as one of Donna’s former lovers, Sam, is also impressive, particularly in his second act rendition of Knowing Me, Knowing You.

But there were moments in the louder songs when the lead vocals for some performers felt lost in the mix. I don’t know if this was a technical issue or about the strength of the vocals, but it meant that some of the numbers lacked the required oomph to really get the party started. It may be something that is resolved as the cast settle in to their run.

But when the large cast all sang as a single chorus, the songs really took off.

It is like one of those Quattro Formaggio pizzas – enjoyable but very, very cheesy. 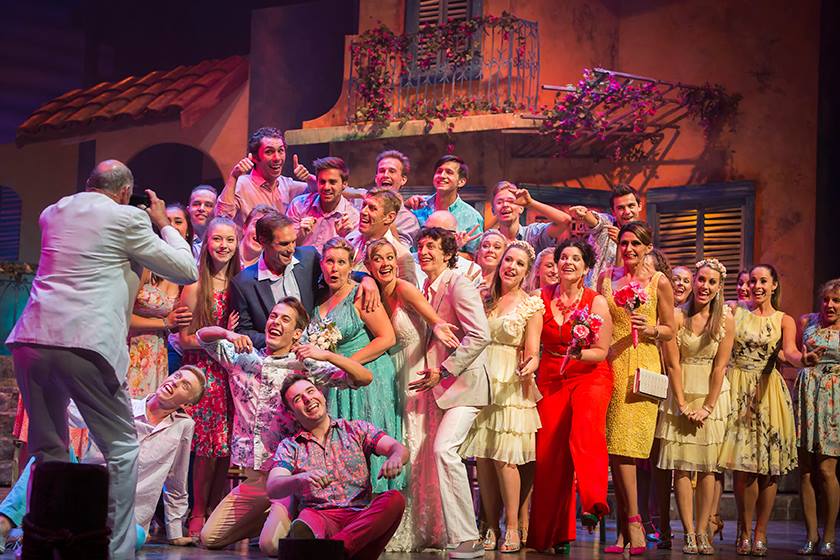 Showbiz delivers a top-notch production of this super musical, with all of the lavish production values that are the hallmark of their shows: a large and impressive set, rock concert lighting, stylish costumes, and an ensemble so taught, trim and tanned it looks they are genetically engineered especially for this season!

Mamma Mia! is a testament to the enduring power of the music of Abba. As a musical, it is functional at best, with a story line skimpier than that of the onstage costumes serving only as a vehicle to get us from one mega hit to the next. However, no one in the audience seems to care remotely. The liberal doses cheeky English humour with more than its share of risqué jokes, and the rom-com style plot, with its obvious dénouement, go down a treat with the appreciative and enthusiastic opening night crowd.

The music, which is what it’s all really about, is expertly realised under the baton of Richard Marrett. The nine-piece band skilfully performs the intricate and clever music with energy and finesse. The off stage vocal ensemble add intensity to the work of the onstage ensemble, which given the physicality of their role in the show, is a smart move. One small gripe here though: frequently the volume of the off stage singers drowns out the onstage soloist, however I’m sure these opening night teething problems will sort themselves as the season progresses.

Despite the saccharine pop reputation of Abba, it never fails to impress me how complex and demanding their songs are, and in places this is evident with some of the performers struggling with the large vocal ranges and stylistic challenges required to sing them. However, the audience are more than happy to clap and sing along, and the energetic and committed performances from the entire cast gloss over any moments where the songs may seem to suffer.

Sarah Kelly in the role of Rosie is a firm audience favourite with a performance that has us in stitches. Her comic timing, warmth and earthiness are a treat. Kelly’s characterisation mirrors the excellent (albeit brief) performance of Laura Hasson as Ali at the opening of the show.

Emily Burns as Sophie, and Ben Freeth as Sky have excellent onstage chemistry, and perform with a confidence and assurance beyond their years. Burns, in particular, has that indefinable quality that demands you watch her wherever she is on stage.

Matt Pike as Sam and Juliet Reynolds Midgley as Donna deliver the stand out performances of the night – Abba is in safe hands here. Their duet of ‘S.O.S’ is one of the most musically satisfying moments of the night. Reynolds Midgley also finds the fleeting moments of emotional truth in the show with her performances of ‘Slipping Through My Fingers’, and ‘The Winner Takes It All’.

However where Mamma Mia! shines is in the full cast numbers. Director and choreographer Stephen Robertson knows how to fill a stage with nuclear level energy that blasts through the footlights and hits the audience full force. The unbridled appeal of this show lies in numbers like ‘Voulez-Vous’, ‘Does Your Mother Know’ and ‘Lay All Your Love On Me’. The male ensemble’s scuba ballet (not a phrase I ever imagined typing) is hands down one of the funniest things I’ve seen on a stage. Judging by the applause I’m not alone in my appreciation here.

The extended curtain call / encore has much of the crowd on their feet, which is not a usual position for Christchurch audiences. I predict a sell-out season for Showbiz if tonight is anything to go by. If you are a fan of Abba and / or large scale, pleasure filled entertainment, say “I Do, I Do, I Do” to this season of Mamma Mia! 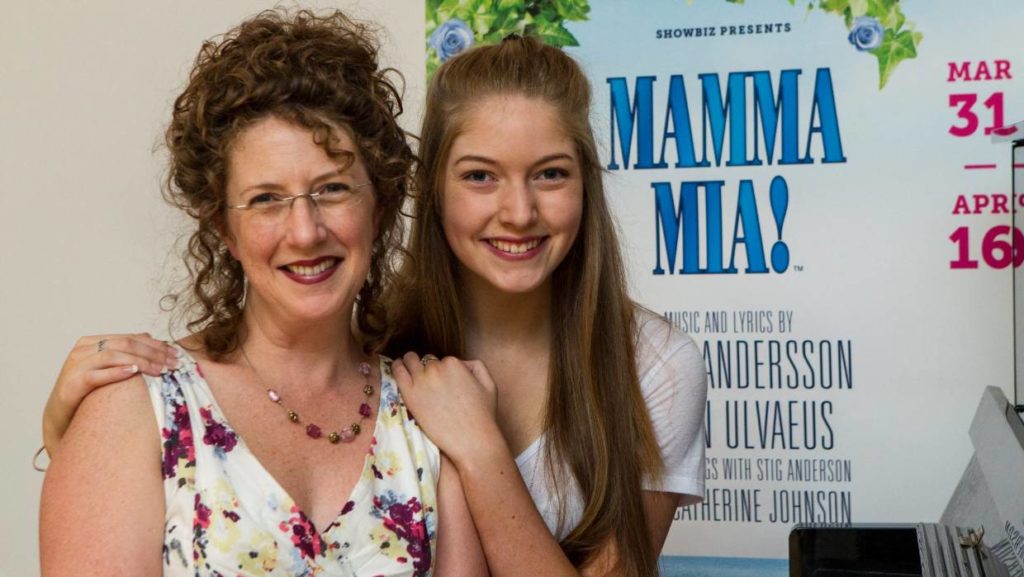 Stage veteran Anne-Marie Gilmore has a dream to share her love for theatre with her daughter Sophie, and this week the dream will become reality.

It will come together in the jukebox musical Mamma Mia! with the central theme focused on the relationship between a mother and daughter.

Super trouper Anne-Marie Gilmore, 47, will provide backing vocals of the songs from ABBA, the first pop group she fell in love with.

Mamma Mia! marks her 16th production with Showbiz, starting with the 1992 production of Me & My Girl.

Her husband Shaun Gilmore, 50, will make it a family affair as he will work in the backstage crew as a followspot​ operator.

The story, set on a Greek island paradise, is about a young woman’s quest to discover the identity of her father on the eve of her wedding.

“When [Sophie] was younger I wasn’t really sure if I’d still be doing it, I always thought in the back of my head that it would be really lovely to do a show with my daughter.

“When said she was interested in doing Mamma Mia!, I was secretly really pleased. Then when we both auditioned and were both successful in getting in, it was the icing on the cake.”

Anne-Marie Gilmore said there were moments in the story that made her think about her daughter.

“One of the songs that Juliet sings where she’s playing Donna is called Slipping Through My Fingers which is a very beautiful, poignant wee ballad about a mother thinking about her daughter who’s growing up and how the relationship is changing and time is running out; the daughter is growing up and doing her own thing.”

“It’s hard not to draw parallels when you’re a mother with that kind of song.”

Ensemble dancer Sophie Gilmore almost stepped in to fill a chorus role in Spamalot​ last September with her father, but the original cast member made a swift recovery.

“It would have been a great experience, but now I get to be here with Mum,” she said.

The 16-year-old Burnside High School student will take a chance on her Showbiz debut in Mamma Mia!.

“Especially when Emily and Juliet are playing the roles and the characters are having a bit of a confrontation, it reminds me of my Mum and I.

“But I can’t personally relate to being married at 20 years old, I think that Mum probably wouldn’t be too keen on that either.”

She first saw her mother in Beauty and the Beast as The Wardrobe when she was 6.