Find out about tickets

By Arrangement with Alan Janes

The Ticketek Box Office at the Isaac Theatre Royal is located in the theatre foyer.

Find out about tickets

Buddy has had audiences on their feet in every corner of the globe and now "The World's Most Successful Rock 'n' Roll Musical" is back and ready to explode onto the stage in a toe-tapping, hand-clapping extravaganza!

In 1959, the man who changed the face of popular music tragically died in a plane crash aged just 22. Now Buddy tells the story of the three years in which he became the world's top recording artist with a show that features over 20 of Buddy Holly's greatest hits including 'Peggy Sue', 'That'll Be The Day', 'Oh Boy', 'Everyday', 'Not Fade Away', 'Rave On' and 'Raining In My Heart'.

Buddy follows Buddy Holly from his first recording contract through to his move to New York, to his final legendary performance at the Surf Ballroom in Clear Lake, Iowa.

Seen by over 22 million people worldwide, this show is not to be missed as Buddy sings his way through two hours of the best rock 'n' roll songs ever written. 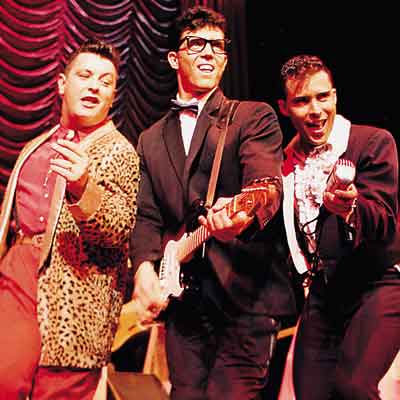