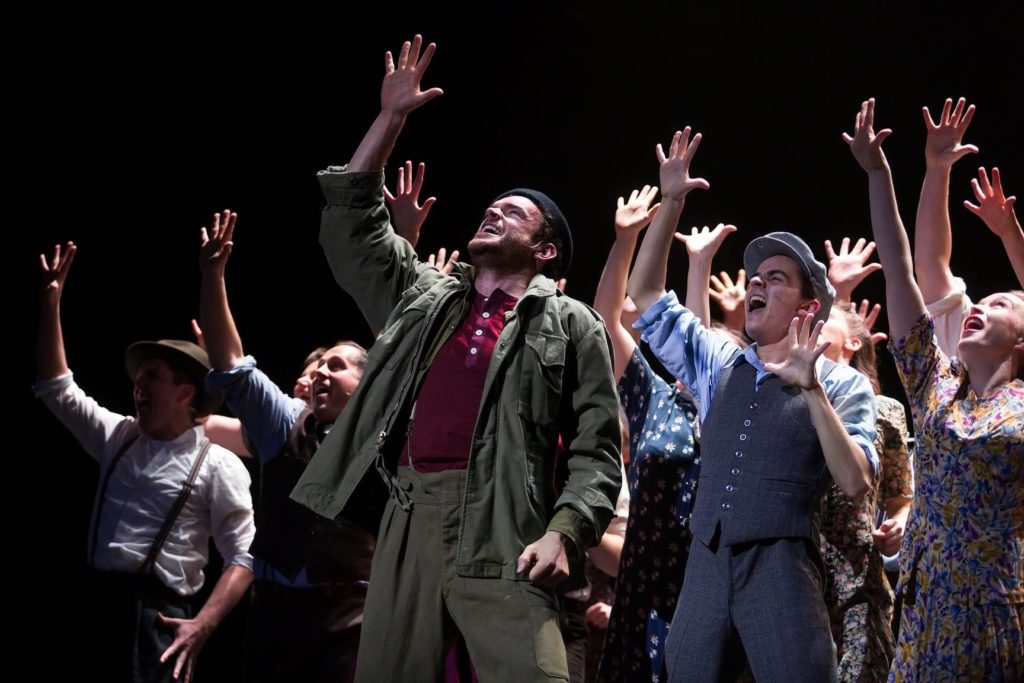 Where do I begin? Halfway through the first act it strikes me that New Zealand musical theatre is in triumphant form, for this production of Evita is a triumph, a tour de force, and I am deeply impressed.

Evita is the brainchild of Tim Rice who, in 1973, caught the tail-end of a broadcast about Eva Duarte, the working-class actress who rose to become first lady of Argentina, as wife of Juan Peron. Eva’s popularity soared through her controversial charity work and her extraordinary charisma. The stage musical was informed by Argentine director Carlos Pasini Hansen’s film Queen of Hearts, which Rice saw “at least twenty times” and “was hooked”.

An original, if politically risky concept for a stage musical, it shows Rice and Lloyd Webber, perhaps ironically, at their best. Evita is a powerful theatrical performance and experience.

It’s difficult to know how much of the choreography and styling of such a famous show is prescribed. Harold Prince directed the West End and Broadway productions. However, Hon Lianne Dalziel, Patron of Showbiz Christchurch, states that “this production brings fresh life to a classic with new design, direction, and orchestration”.

Stephen Robertson, the director/choreographer of the current Showbiz Christchurch production, is to be applauded for his great eye for detail. The amateur cast is large and with a large cast there will often be one or two performers who, shall we say, are less attentive than others. Not so in this production. I am struck by the focus and commitment of every cast member. This is a stunning performance.

The sets, though simple, are evocative and effective. The costume department has done a brilliant job. The music, under the direction of Richard Marrett, is superb. The actors are ‘in the zone’. In such a stellar cast it seems unjust to single out individuals but this heaven has a Venus and a Sirius.

Emily Burns is phosphorescent. What a star! As Evita, her transformation from a coquettish girl of fifteen to an ailing woman of thirty-three is entrancing to watch. Her stage presence is compelling and I couldn’t take my eyes off her. And Jack Fraser who plays Che, the everyman narrator, is a dynamic and powerful presence. These two need to own and command the stage and they certainly do.

To be fair, all of the leads hold their own. I love the sensitivity of Roy Snow, as Peron, performing ‘She is a Diamond’, and Jane Leonard as Peron’s mistress, singing ‘Another Suitcase in Another Hall’.

The ending is unusual. I’m not sure if it’s a timing factor but I’m not prepared for the final line. It’s only the fall of the curtain that alerts me to the play’s conclusion. Is this a writing failure or an issue of timing?

This Showbiz Christchurch production of Evita is an ambitious undertaking and sports an enormous cast. It has brilliant set pieces with well-honed scene transitions, impressive orchestrations, dynamic choreography, and a tiara of sparkling performers. It succeeds in translating what is a foreign and complicated life into an engaging and accessible tale, with characters we come to care about. It’s the first time I’ve seen the show and I love it.

If you long for world class production values, for the quality of performances found in the West End, or on Broadway, you can find them from now to October 1st at the Isaac Theatre Royal in this dazzling production of Evita. Congratulations to all involved. 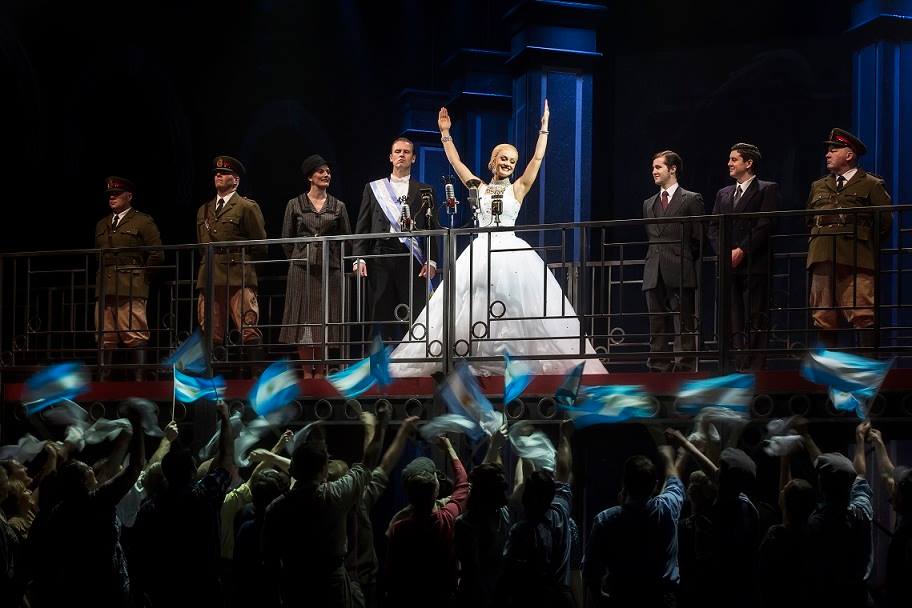 In the musical’s latest reincarnation presented by Showbiz Christchurch it is all good – in fact, it’s very good indeed.

“Any musical which begins with a funeral can’t be all bad,” the producer, Hal Prince, reportedly commented after reading the first draft of Evita.

Andrew Lloyd Webber and Tim Rice’s musical voyage through of the life and times of one Maria Eva Duarte de Peron, or Evita to her adoring thousands, is still not at all bad.  In the musical’s latest reincarnation presented by Showbiz Christchurch it is all good – in fact, it’s very good indeed.

Any musical constructed on such a delicately balanced blend of beauty and bombast will always present major challenges to the director and cast. One false step and the entire edifice will descend into lachrymose, over-blown portentousness.  Under Stephen Robertson’s finely-tuned direction, principals and cast successfully negotiated the perilous line to emerge with a production which became a revelation.

As a work of musical theatre, Evita is carried on three sets of shoulders. While the ensemble sections are enormously important – and they were exceptionally good on opening night – the trio of principals must display, collectively and individually, a formidably strong combination of acting and singing abilities to sustain the musical.

In the title role, Emily Burns gave a formidably focused first-night performance, attacking her role at full emotional throttle. Evita could easily become a creature of cliché, but Burns abandoned any temptation to overplay the melodrama, preferring to give us something hard, venal yet disconcertingly vulnerable.

Moving between brassy assertiveness and soft seductiveness, her singing could never be described as  pretty, but it was perfect for the part. Together with an equally  powerful acting presence, she triumphed, especially in her scenes with Roy Snow as Juan Peron. I would have perhaps liked less impassiveness and more rabble-rousing dictator, but Snow nevertheless became an excellent foil to Burns’ calculated glitter.

As Che, companion, narrator and observer, Jack Fraser injected exactly the correct amounts of raw cynicism and outrage into the part with a voice and stage presence which embedded his role firmly in the mind.

There was no reason for tears, Argentinian or otherwise, about a production which struck all the right notes with distinction.

Comments Off on Evita Review: The Press