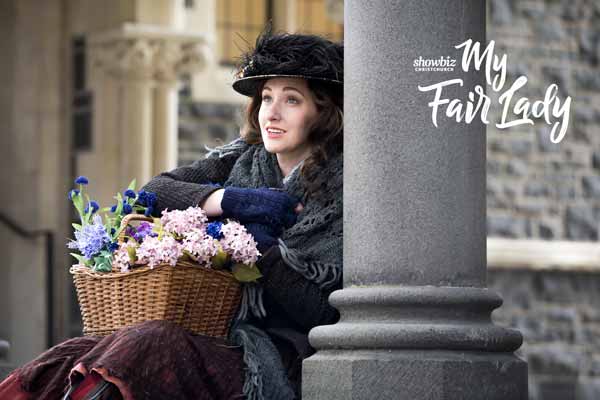 What is the relevance of My Fair Lady to a modern audience?

My Fair Lady deals with a lot of universal themes – education, class structure, inequality of sexes. I think those are all very important issues that unfortunately are still relevant. The play is set in 1912, but even now in society women are marginalised and denied opportunities. I think it is inspiring to see how, through hard work and determination, Eliza can rise above her station despite everyone’s expectations.

In the film My Fair Lady it’s all happily ever after but the original George Bernard Shaw play Pygmalion is much more ambiguous – which way does this production lean?

Without giving too much away, I believe that our production is very conscious about giving Eliza the justice she is entitled to.

So is this a production for the post #MeToo age? Does that involve any text changes?

There are no changes to the original text, and I don’t believe there needs to be. The show is about a woman trying to break through a patriarchal and largely misogynistic society. It shows us a strong woman who is struggling to retain her own identity as she is surrounded by men telling her she must be different – and that’s where I think a misstep with the ending can make all the difference. I hope to portray an Eliza that demands respect and equality and refuses to settle for anything less, and I believe the text supports that.

In what other ways does the production take a fresh look at Eliza the would-be flower-shop owner/entrepreneur?

Eliza has always been a well-written and extremely strong character, so we have a very good foundation to start with. Something we’ve been conscious of is not indulging in romantic notions about her feelings towards Henry Higgins. I think people expect that romance element in a classical musical, but even when My Fair Lady was written in 1956 the form of the Broadway musical had begun to change. If you read the original script vs the published script, you see that the writers were constantly removing lines and lyrics that were too overtly romantic. The only love story in this show is Eliza’s love of learning.

George Bernard Shaw put it best in his epilogue to the original Pygmalion; “People in all directions have assumed, for no other reason than that [Eliza] became the heroine of a romance, that she must have married the hero of it. This is unbearable…the true sequel is patent to anyone with a sense of human nature in general, and of female instinct in particular.”

For any young Elizas in the audience, what do you hope they will get from the production?

This is a glorious role to play, and it’s one I’ve been dreaming about doing since I was a little girl. Even if you can’t put your finger on why, you know Eliza is different from your typical musical heroine. She isn’t driven by the love of a man; she doesn’t fall in love after one heartfelt glance and duet; she talks back; she doesn’t accept things just because she is told that’s the way they should be; she wants more; through modern eyes, she is a feminist – and she succeeds not by being ‘one of the boys’ but by embracing her femininity and softer side. It’s a very beautiful transition. I think that will be something that speaks to a lot of people in general, but hopefully a lot of young girls that will imagine themselves playing the role one day.

It’s not addressed really in the play because we jump in when Eliza meets Higgins, but I think it’s important to think about what Eliza has been through just to get to where she is at the start of the play. Her father is an abusive drunk, she never knew her mother and she can’t have had a happy childhood. But, she affords a place to live on her own, she is entrepreneurial and earns money selling flowers. The majority of poor women at that time would be earning their living on the streets in a much cruder way, and one of their only amusements would be over-indulging in liquor. Only about one in twenty females could read and only one in forty could write. Eliza proudly says that no one has ever seen a sign of liquor on her, and upon their first meeting she asks to read what Higgins has written about her (which showcases her literacy). Eliza is a success story before the musical even begins!

There are still plenty of fabulous costumes, though, right?

Oh, of course! Hats, hats and more hats. Those costumes from the original movie are so iconic, and Stephen Robertson has done a brilliant job interpreting them in his own way. At my first costume fitting I could look at my costume rack and I knew exactly which dresses would be worn in each scene. They synced up exactly with the images of Audrey Hepburn I had in my head. They’re truly stunning.

And are you enjoying singing the wonderful songs?

I sang “Wouldn’t It Be Loverly?” in my talent show when I was about ten years old, and the fact that I now get to sing that song on the stunning stage of the Isaac Theatre with a full, lush orchestra is just mind-blowing.
Songs are written in a way that match the voice of the character that is singing them. So as Eliza’s voice changes from Cockney to Standard British, I get to run the gamut of singing very character-driven, brash songs to these flowing, lyrical soprano pieces. It’s really extraordinary, and such fun to tackle.

How did you come to move from California to Christchurch?

I originally moved to Wellington on a working holiday visa. I stayed there for a couple years, and moved to Christchurch when I was cast in Legally Blonde at The Court Theatre. The talent level in Christchurch, of the performers and the production teams, was so high that I knew I wanted to make the move here permanent.

What have been some highlights of your theatrical career?

I got to spend several summers in Edinburgh performing in the Edinburgh Fringe Festival. We would do about twelve shows in rep, and any show you weren’t performing in you would be working on in some capacity. It was some of the hardest work I’ve ever done, and absolutely the most rewarding. Those summers instilled in me my work ethic and passion for theatre. The feeling of being on High Street surrounded by swarms of people just percolating with excitement about theatre is unrivaled.

What’s your go-to spot in Christchurch?

I would say my ideal evening would be dinner at Sakimoto (in Cathedral Junction), dessert at Rollickin Gelato and drinks at The Last Word (both on New Regent Street). And you know what, all of those, along with Casa Publica and Crowne Plaza (favourites with the Showbiz cast and crew) are very close to the Isaac Theatre Royal so maybe I’ve just made your pre and post-show plans for when you come to see My Fair Lady!

What’s your favourite way to spend a Sunday afternoon?

My favourite Sunday would be my partner and I taking a walk down by the river and following it into town and grabbing lunch and seeing a movie. Very relaxing, lots of fresh air and sunshine.

My parents. They are both performers, and about a decade ago they moved to the Czech Republic to pursue some really cool theatrical opportunities. They absolutely made a name for themselves there and seeing them take such a big leap is partly what inspired me to move to New Zealand.

I grew up in Southern California, so where I come from it’s normal to love Disneyland as much as I do. But I’ve come to realize that my level of fandom is a bit more unusual this far abroad, so I’ve learned to keep some of my stronger feelings to myself. But I will definitely watch clips on YouTube of parades or firework shows from Disneyland. It just makes me feel like I’m at home and fills up my heart.

I can’t leave the house without …

My headphones. I don’t have a car, so I walk quite a lot or take the bus. I love having that time to listen to podcasts or discover new musicals. Or sometimes I’ve recorded myself saying my lines, so I can listen back to them and mumble along like a crazy person.

What would be your dream role or dream collaboration (with director, writer, etc)

Oh no, this is way too hard! I could come up with a million examples of roles I’d love to play (“Ulla” in The Producers, “Peggy” in 42nd Street, “Cinderella” in Cinderella), but the truth is that I’ve fallen in love a little bit with every character I’ve had the chance to play and I anticipate that will continue to happen.

Comments Off on Q&A with Kira Josephson (Eliza Doolitte)