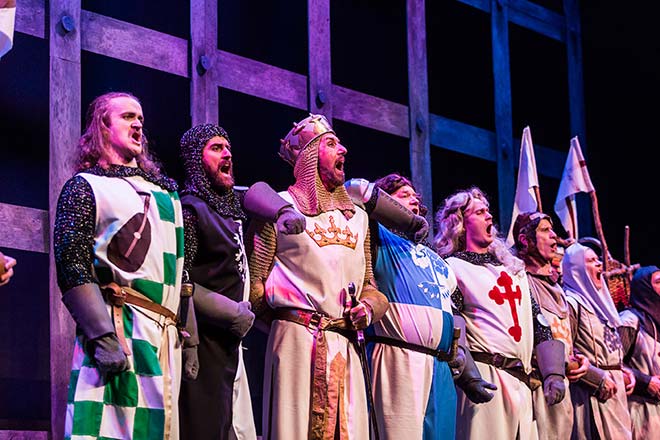 A comedy musical lost to the Canterbury earthquakes will finally have its Christchurch premiere on Friday night.

Monty Python musical Spamalot was just weeks from opening when the February 2011 earthquakes struck. Costumes, cast and sets were ready to go, but the Isaac Theatre Royal was badly damaged and stranded in the red zone.

Members of theatre company Showbiz were making costumes for the show in their city centre headquarters when the quakes hit. When they returned to the building months later, the costumes were still threaded into the sewing machines. Theydiscovered that their prop Excalibur sword had been bent out of shape.

The costumes and sets were sealed in a shipping container and stored on a Darfield farm, where they waited nearly four years for their moment in the spotlight.

Once the restored Theatre Royal reopened last year, Showbiz could think about restaging the show.

Fresh auditions were held, but many of the original cast members have returned. Actor Jason Reekers has been promoted from Lancelot in the original to King Arthur in the resurrection.

Spamalot is a musical comedy written by Monty Python member Eric Idle. It is loosely based on the 1975 film Monty Python and the Holy Grail, but parodies a broad range of musical classics from West Side Story to Fiddler on the Roof.

“It has been resurrected from the ruins of the quake,” she said.

“There is a great satisfaction in bringing it back. It is pretty special to come back to the Theatre Royal.” 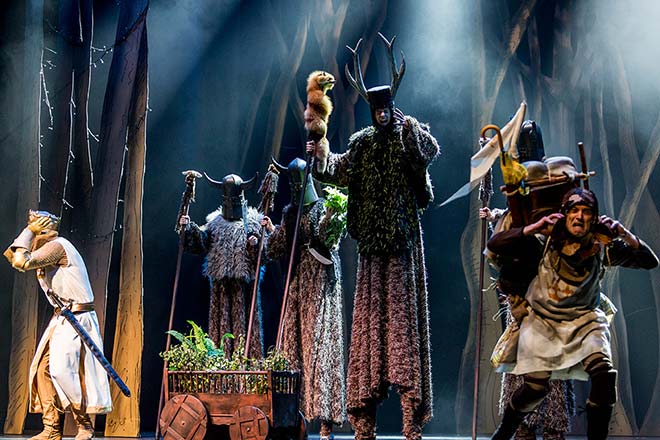 Showbiz Christchurch’s original production of Spamalot was in rehearsal during, and ultimately fell victim to, the Canterbury earthquakes in early 2011. It’s fitting, and a great Python-esque middle finger to seismic events, that the premiere of this season of Spamalot comes on the fifth anniversary of the first earthquake in September 2010.

The show draws strongly from Monty Python’s 1975 film Monty Python and the Holy Grail, taking a thoroughly bastardised version of Arthurian legend, dousing it with arch silliness, and adding a couple of dozen dancers and company members to create a self-aware Broadway musical – although not many other musicals would feature dancing plague victims, a fish-slapping sequence, and killer rabbits.

Coming into this production it’s fascinating to listen in on the audience who, pre-show, are sharing their interest in, exposure to and experience with the anarchic and surreal humour of Monty Python’s Flying Circus, its various offshoots, and the Pythons’ individual side projects. This is material that is both deeply personal to people and widely loved, and furtively exchanged quotes are like a comic secret handshake.

Spamalot clearlyarrives laden with cultural capital and a great deal of pleasure is gained from the (re)presentation of highly familiar material. In this sense the musical is a ‘best of’ aspects of Python, as well as a clever pastiche of dozens of musical genres and styles, and for portions of the show audience members are spontaneously reciting the lines or singing the songs along with the performers.

I find that the musical is much bolder and has more depth when it diverges from its source material, such as when it transforms the original presentation of ‘Knights of the Round Table’ to a Vegas floor show, plays around with the conventions of musical theatre in its self-aware power ballads, or offers an unexpected big cast number about what you need to do to succeed on Broadway.

Sara Brodie, as director and choreographer, has shaped the show with a strong hand, ensuring that Spamalot is a tight and coherent package that takes full advantage of the script’s wit and audacity. Luke Di Somma, in his position as MD and conductor, draws bold performances from the cast and orchestra, ensuring that there is light and shade alongside the more strident numbers. The large assembled company, not to mention the crew, present swift scene and costume changes and shifts in tone with precision.

The cast is led ably by Jason Reekers, who is marvellous as the vapid, vainglorious King Arthur, both channelling Graham Chapman’s original presentation of the role and making it clearly his own. Leigh Wilson plays the aquatic diva the Lady of the Lake (notably the only female lead), and her impressive belt and remarkable vocal dexterity, not to mention her emphatic stage presence, mark her increasingly cranky performance as a highlight of the show.

The core cast of Knights (Jason Pemberton, John Bayne, Ian Lester, and Jack Marshall) each command their own subplots and deliver strong comic performances in both their physical characterisations and their singing and dancing. My companion and I decide, though, that the MVP award goes to supporting cast member Brett McPhail, whose sharply rendered performances as Not Dead Fred, Herbert and the lead French Taunter are scene-stealing in the best possible way.

This is a complicated and ambitious production to put together, and the production and technical team have between them created a slick, great-looking show that makes outstanding use of the capabilities of the Isaac Theatre Royal. I particularly like Harold Moot’s set design, which does an excellent job of shaping the space on stage and capturing the Python aesthetic, and a good deal of pleasure comes from set-related gags as pieces (and characters) are flown in and out.

My only beef – apart from a woman in front of me who won’t stop singing along – is that in places the diction is a little muddy, and I have to concentrate quite carefully to make out some of the more rapid delivery of lines. This is especially the case with the Arch Wizard of New Zealand, who plays the historian: I love that he has a role in this show but I can’t make out a word he says.

Comments Off on Glowing review for Spamalot – Theatreview