Sister Act is his 22nd season working with Showbiz, since his first (and only) onstage appearance in Evita in 1991.

As well as orchestral percussion, he has studied Afro-Cuban, Spanish and Indian music. Craig is currently a member of the Christchurch Afro-Cuban ensemble - a group of percussionists playing (and singing) various Afro-Cuban folkloric music styles on a range of percussion instruments.

He loves the thrill of theatre based percussion where there often are rapid changes between instruments with no time to rest. He especially enjoys the challenge that comes with researching and sourcing unusual instruments to fulfill the requirements of a score and the careful consideration of soundscapes and effects that are a large part of the percussionist's job.

Highlights from his work with Showbiz include seasons of: A Chorus Line, A Westside Story, Miss Saigon, Hairspray, Les Misérables and Monty Python's Spamalot.

In his spare time he dabbles in musical instrument restoration and enjoys being able to incorporate his engineering background into his musical work. 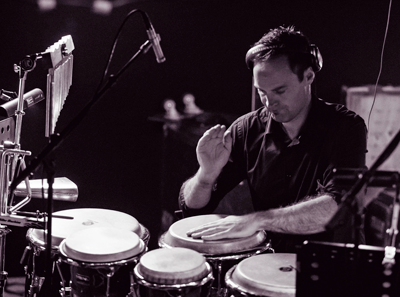