Don't Cry For Me Argentina. The meteoric life and death of The Rainbow of Argentina, Eva Peron.

Recorded in 1976 as a two-disc Rock Opera concept album, Evita was a huge musical success from its first release. The famous anthem “Don’t Cry for Me Argentina” went to No. 1 in Britain and around the world in the months following its debut, making a star of the recording artist Julie Covington. The stage musical then opened in London in 1978 making a global star of the shows, till then, unknown leading lady, Elaine Page. The West End production won the Laurence Olivier Award for Best Musical, and then went on to open on Broadway where it was the first British production to receive the Tony Award for Best Musical.

The story of Evita tracks the journey of Eva Duarte, following her early life, her meteoric rise to power, charity work, and eventual death, aged 33. Duarte became Eva Perón, the wife of the Argentine president Juan Perón and the prototype of the mid-20th-century power blonde. The musical explores the very contemporary idea of fame as an amoral religion.

Evita is one of the great masterworks from the powerhouse team of Andrew Lloyd Webber (music) and Tim Rice (Lyrics). The concept of a theatrical Rock Opera, launched first as an album, was building on the success they had enjoyed with Jesus Christ Superstar. Evita enjoyed a string of worldwide productions after its initial London staging and was then released as a major film in 1996 starring Madonna in the title role, and Antonio Banderas as Che. The Showbiz Christchurch Evita is based on the successful revival production that opened in the West End in 2006 to critical acclaim, and then again on Broadway in 2012.

This production of Evita will capture all the grandeur and majesty from the giants of the modern musical, Andrew Lloyd Webber and Tim Rice. An unmissable theatrical experience that will create memories to last a lifetime. 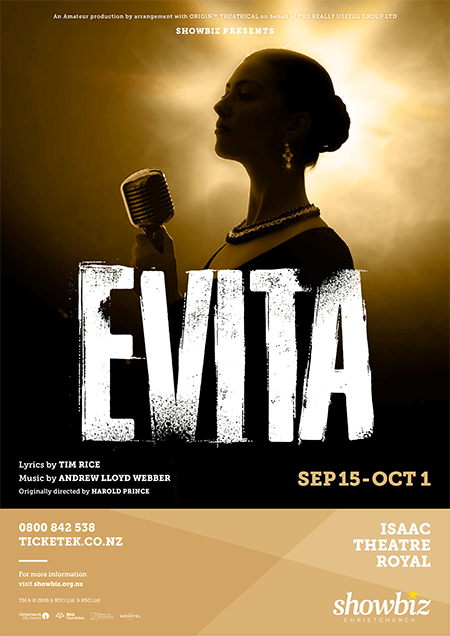