Georgina first played for Showbiz Christchurch in the 2007 production of CATS. She has since performed in many other Showbiz productions, as well as for The Court Theatre, the Christchurch Symphony Orchestra, Symposium Jazz Orchestra, the All Girl Big Band, NASDA, North Canterbury Musical Society, and in numerous solo and chamber performances, ensembles and recordings.

Georgina plays most wind instruments - except for oboe which continues to defeat her. For Showbiz, she has played clarinet, Eb and bass clarinets, all kinds of saxophone, flute, piccolo, and sopranino recorder. She also sings in Atlas Voices and for other Christchurch choirs, and directs shows, choirs and many different performance groups.

By day, she is a high school music teacher and itinerant instrumental tutor. Hiding in the pit and playing for musical theatre is her absolute favourite musical activity, even though her daughter once said to her ‘When I grow up Mummy, I want to be in shows. Actually in them though, not like you’. 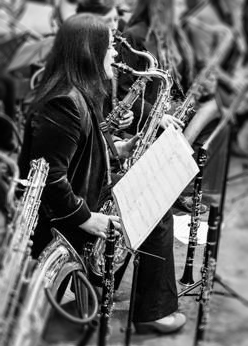