Diva fever has struck town. And what is there not to worship about disco-dancing nuns crossed with soulful toe-tapping beats bound to take you to cloud nine?

Go-go boots, disco balls and shimmering lights are in the house, as Showbiz Christchurch stages its groovy new production of Sister Act.

This show is a visual spectacle, and when those nuns get down to boogie in their sparkling get-ups under gleaming stages lights, it will leave you dazed – seriously, this show is bright.

But there is a heart-warming substance behind all those sparkles which stars a vocally powerful cast led by the bold Monique Clementson.

As many will know already, the story is set around a hopeful diva who finds herself in a convent as part of a witness protection programme after she accidentally sees her dangerous boyfriend kill a member of his crew.

Yet this tale will have you beaming from ear-to-ear as one line wonder, Deloris Van Cartier (Clementson), transforms a tone-deaf choir of nuns into a heavenly-sounding ensemble.

The nuns made the show, especially in large ensemble numbers Take Me to Heaven and Raise Your Voice.

The fact their dancing was ever so slightly out of sync at times was actually what made them compelling to watch. To me it emphasised real people learning the joys of dance and breaking away from everyday, conventional life.

A highlight is when Nickie Wellbourn, as the no-nonsense Sister Mary Lazarus, raps – no surprise that received a big applause.

The choreography was clever, especially the dynamic performance of When I Find My Baby, featuring gangsters and edgy dancers, Ella Wilson and Jenna Morris-Williamson, as hookers.

Clementson did a marvellous job of the Philadelphia accent, which was no easy feat.

While it sounded as though the microphones needed to be turned up slightly in the opening number, Clementson is a strong performer and her charismatic stage presence made it easy to see why she was chosen for the sassy role of Deloris.

You cannot forget the slick-moving sets, which add to the visual finesse of the show.

Glitzy night clubs transforming into beautiful neo-Gothic style churches portray the theme of the show beautifully and deserved to be applauded.

There is nothing like watching an unlikely friendship between a diva and a group of nuns blossom, and it was beautiful to watch the nuns put their lives on the line to save Deloris from murder.

But humour and happy tunes are the bread and butter of this upbeat show and will have audiences bopping all the way home.

Comments Off on Disco-dancing nuns ‘will leave you dazed’

Sassy, stunning and beautiful – the final production of the 2017 Showbiz Christchurch season was near close to perfect.

Opening to an energetic crowd at the Isaac Theatre Royal, Sister Act – A Divine Musical Comedy had the audience in stitches from the off.

The story follows exploits of a 1970’s wannabe disco diva as she escapes from her gangster boyfriend. Having witnessed him commit a murder, she is put in protective custody in the one place the cops are sure she won’t be found: a convent.

Directed and choreographed by New Zealand Arts Foundation Laureate Sara Brodie, with a gospel and disco soundtrack written by eight-time Oscar winner Alan Menken, this is a performance for the ages.

Using her unique disco moves and singing talent, diva Deloris inspires the nuns to create a contemporary choir, becoming an immediate hit with the community. Word of their success travels fast though and reaches her ex-boyfriend Curtis, who arrives with his gang to settle the score.

With pitch perfect renditions of the greatest Broadway hits, each song was met with an equally powerful audience response. Simply put: they loved it.

Comments Off on Sister Act ‘near close to perfect’

The late seventies were a time of iconic energy that refused to be contained – John Travolta brought a new level of style to the white flared disco suit while Diana Ross’ retro wardrobe choices set the tone for the era.

The seventies represented a vibrant era of psychedelic colours, bellbottoms, Donna Summer hairstyles, liberation and love; culture at its boldest and brightest.

As an inspiring tribute to these iconic times, Showbiz Christchurch is hosting a ‘70s Night on 22 September to coincide with its highly anticipated season of Sister Act, which is set in 1977.

The show tells the story of wannabe disco diva Deloris Van Cartier, on the run from her gangster boyfriend. She hides in the one place the cops are sure she won’t be a found: a convent!

Disguised as a nun, she finds herself at odds with both the rigid lifestyle and the uptight Mother Superior. Using her unique disco talents, Deloris inspires the nuns to create a contemporary choir, and they become the hit of the community.

Word of their success reaches her ex-boyfriend, who tracks her down to the convent. A battle ensues between the mob and Deloris’s newly found sisterhood of feisty nuns.

Filled with powerful gospel music, outrageous dancing and a truly moving story, Sister Act is a sparkling tribute to the universal power of friendship.

Seventies lovers are invited to dress up in their favourite outfit that pays homage to this era and come along to see the show (standard ticket prices apply). The night will be themed with a ‘70s disco vibe, spot prizes and a grand prize of luxury Christchurch hotel accommodation and 2 x Premium Tickets for the first Showbiz show of 2018 for the best costume are up for grabs.

Comments Off on Break out the bell bottoms! 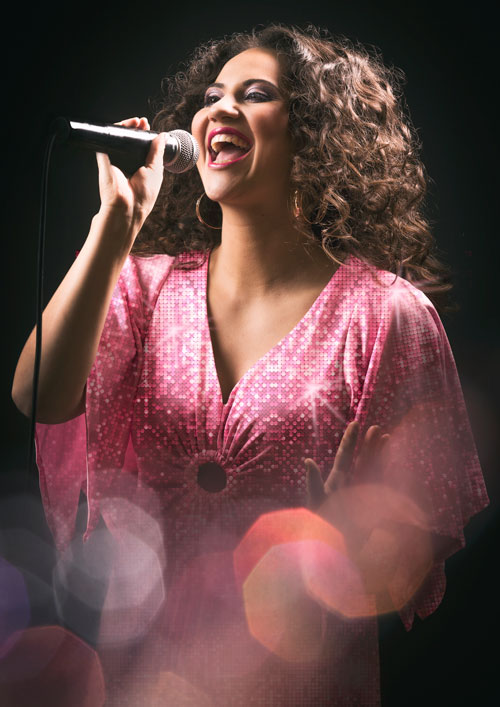 The final production in the Showbiz Christchurch 2017 season opens at the Isaac Theatre Royal on 8 September. Sister Act – A Divine Musical Comedy follows the exploits of 1970s wannabe disco diva Deloris Van Cartier as she escapes from her gangster boyfriend. Having witnessed him commit a murder, she is put in protective custody in the one place the cops are sure she won’t be a found: a convent!

Disguised as a nun, Deloris finds herself at odds with the rigid lifestyle of the nuns and their uptight Mother Superior. Using her unique disco moves and singing talent, she inspires the nuns to create a more contemporary choir and they become the hit of the community. Word of their success reaches her ex-boyfriend Curtis, who arrives with his gang to settle the score with Deloris.

Sister Act is directed and choreographed by New Zealand Arts Foundation Laureate Sara Brodie who has an extensive list of directorial credits to her name including over eighty productions for theatre companies throughout Australasia. Her last Showbiz Christchurch production was directing Monty Python’s Spamalot in 2015.

Musician and composer Matthew Everingham is directing the score of gospel and disco music written by Tony and eight-time Oscar winner, Alan Menken (Aladdin, Beauty and the Beast, The Little Mermaid, Little Shop of Horrors).

Monique Clementson will play Deloris, the same role she recently performed in Invercargill Musical Theatre’s production of Sister Act. Clementson is a big ‘70s fan who grew up listening to disco hits and counts Sister Act I and II as her favourite movies. Growing up in Nelson, she and her older brother would compete against each other to sing the high notes in the gospel hits that featured in the Sister Act movies. It wasn’t until Clementson attended the National Academy of Singing and Dramatic Art (NASDA) in Christchurch in 2014 that she realised her favourite movies had been turned into a Broadway musical featuring all new original music.

Charlotte Taylor and Greta Casey-Solly will complete Deloris’s cabaret trio in the roles of Michelle and Tina. 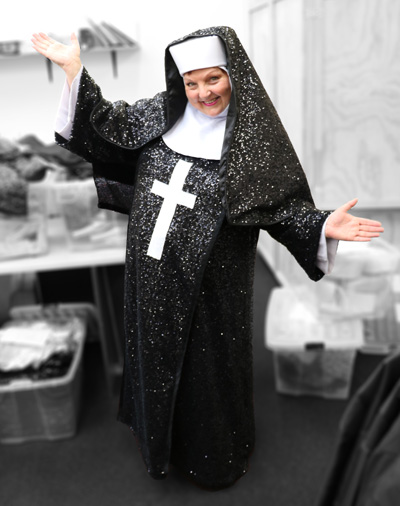 Clementson and Purdie will be joined on-stage by a cast of more than 50 nuns, gangsters, altar boys, singers, dancers and musicians to create a stunning looking and sounding show with all the pizzazz of Broadway.

“The auditions for Sister Act were a revelation as auditionee after auditionee sang incredibly well – which of course meant we had to turn away some very good singers. It is a credit to the voice teachers in Christchurch,” says Brodie. “I am looking forward to hearing our Nuns singing together for the first time, which given their individual talents will be quite something.”

The Showbiz Christchurch production of Sister Act – A Divine Musical Comedy will be at the Isaac Theatre Royal from 8-23 September.