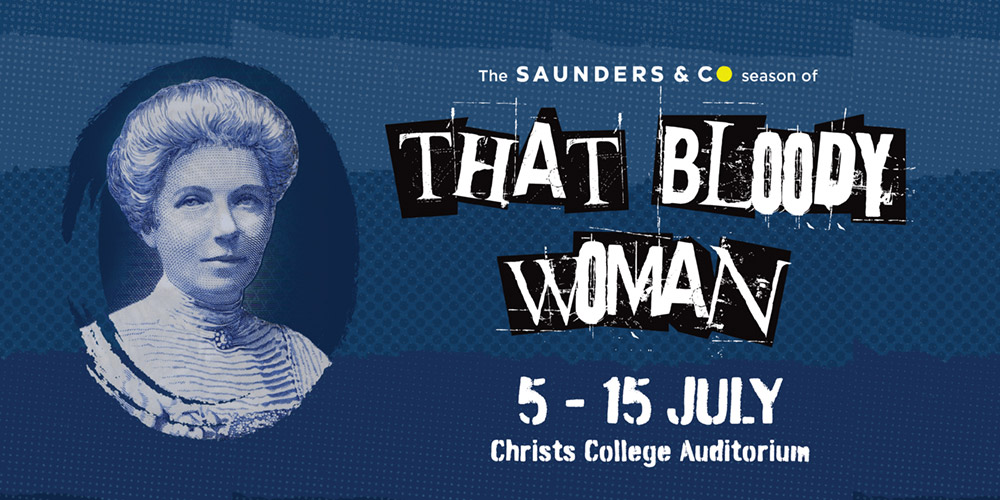 Productions comprise a professional creative and production team whilst volunteer cast and backstage crew are drawn from the local community, offering ordinary people an extraordinary opportunity to perform or support behind the scenes. Our larger scale shows can comprise up to 150 volunteers.

We are looking to expand the pool of creatives we draw from to produce our shows. Whilst previously we have made direct approaches to form our creative teams, we are interested to hear from experienced individuals that are interested in working with us in the future.

Whilst our major productions are generally staged in the Isaac Theatre Royal in April/May and Sept/October time slots, our next production, That Bloody Woman will be held at the Christ’s College Auditorium in July 2023 and produced solely by Showbiz Christchurch.

The season of That Bloody Woman allows Showbiz Christchurch to trial some firsts : a new venue for us, lower budget and thus ticket price for patrons, a locally written work about a local iconic character, and opening up the doors to a new generation of creatives whom we hope will stay with us for future larger productions at the Isaac Theatre Royal or other venues.

We are seeking the following creatives with appropriate industry experience for the forthcoming season of That Bloody Woman:

All these positions are paid roles. Whilst we are particularly interested in developing locally based talent, we are open to receiving EOIs from creatives from outside Canterbury.

Mentoring support from professionals in the same field will be available.

An irreverent and inspirational rock musical about iconic Kiwi suffragist Kate Sheppard and the movement she led to make New Zealand the first country in the world to grant women the vote.

The show is framed as a rock concert for Kate and her ‘gang’ to tell us her story, the story of New Zealand’s suffrage movement and to give us an almighty kick up the ass more than 125 years later.

We see her and her friends transition from temperance to suffrage, taking on the anti-suffrage Prime Minister of the day, Richard “King Dick” Seddon and ultimately persuading a quarter of the female population to sign a crucial petition. But behind the public persona her personal life was in turmoil - trapped in a loveless marriage, in love with her best friend and deprived of her only child when she needed him most.

Inspirational, raucous and electric TBW is, “easy cause to sign up for.” With an eclectic and catchy score, lots of roles for women and the chance for audience interaction, this one act show is sure to connect with your audience.

It may be a Kiwi story, but it’s also a universal one - a story of how one person can start a movement to change the world. This is more than history, this is HER story.

From humble beginnings in a tent in Christchurch, NZ, TBW went on to become a nationwide sellout smash. “Like Hamilton for the US, That Bloody Woman is the musical NZ didn’t know it needed.”

That Bloody Woman was last staged in Christchurch at the Court Theatre in 2016 for a limited season.

As always, we intend to hold open public auditions for a volunteer cast.

Cast size has some flexibility. Recent productions have had 12 performers with various cast members doubling as ‘the gang’ and cameo roles. However, there is scope to increase the number of supporting ensemble if desired.

All the above factors make Christ’s College Auditorium an ideal location for That Bloody Woman.

Whilst the historical connection with the Isaac Theatre Royal is enticing, (Kate held a number of public meetings and rallies there) given the nature of That Bloody Woman, we felt that Christ’s has a more ‘intimate’ feel about it, allowing the potential to interact with the audience to be more successful.

In past productions the show takes place on a fixed stage with no scene changes or requirement for flying scenery. It’s one continuous act with no intermission.

Fill in the expressions of interest online form and attach your CV any other relevant documentation.

If you would like a perusal copy of That Bloody Woman, please email our Production Manager Mandy Perry at prodmgr@showbiz.org.nz.

Applications will be assessed and either in person or zoom based interviews set up soon after where required.

Final approval will be made by the Showbiz Christchurch’s Board of Management.

It is our intention to prioritise the appointment of the Director so they may have input into decision making for the rest of the creative team.

We aim to appoint our full team by mid December2022.