Big musical. big comedy. big hair! The musical with a heart as big as a beehive.

Hairspray is the multi Tony Award winning musical based on the cult 1988 John Waters film Hairspray. The songs include 1960s-style dance music and "downtown" rhythm and blues.

In 1962 Baltimore, Maryland, plump teenager Tracy Turnblad's dream is to dance on The Corny Collins Show, a local TV dance program. When Tracy wins a role on the show, she becomes a celebrity overnight, and meets a colorful array of characters. Tracy seeks to right the injustices of segregation on the TV show using the power of music and big hair, and takes the audience along on a joyous, feel good musical ride that will have you reaching for a bumper can of “Ultra Clutch” hairspray.

In 2003 Hairspray won eight Tony Awards out of thirteen nominations. It ran for over 2,500 performances, averaging an unheard of 99% capacity, for the first two years of its Broadway run, and went on to numerous international tours. The London production was nominated for a record-setting eleven Laurence Olivier Awards, winning for Best New Musical and in three other categories.

In 2007 Hairspray was released as a hugely successful movie with a stellar cast that included Zac Efron, Michelle Pfeiffer, Queen Latifah, and most famously John Travolta in an unforgettable drag role as Edna Turnblad, Tracey’s overweight mother and agent. “Hairspray the Movie” remains one of the most critically and commercially successful movie musicals of the last decade, alongside Mamma Mia! 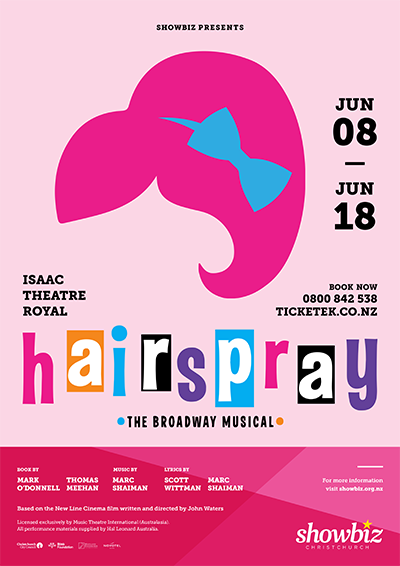 Winner of 8 Tony Awards, and 4 Olivier Awards, including Best Musical