Choosing a date can be tricky. Purchase a FlexiTicket voucher now and commit to a performance date later.

Find out more about FlexiTickets

The Ticketek Box Office at the Isaac Theatre Royal is located in the theatre foyer, and is open Monday to Friday, 10.00am - 5.00pm, and 60 minutes prior to any show.

The cherished story of Cockney flower seller Eliza Doolittle (played originally by Julie Andrews) and pompous linguistics professor Henry Higgins, who wagers he can transform the street-smart girl from the East End gutters into a proper Edwardian society lady. But who is really transforming whom?

This clash of class, intellect and personalities sparks some of musical theatre’s wittiest banter and memorable songs including ‘Wouldn’t It Be Loverly?’, ‘The Rain in Spain’, ‘On the Street Where You Live’, ‘I Could Have Danced All Night’, and ‘Get Me to the Church on Time’.

When My Fair Lady was first performed in Christchurch in 1962, it set the record at the Theatre Royal, running for 171 performances to an audience of 200,000.

The 60th Anniversary of My Fair Lady was celebrated in 2016 with a production directed by Julie Andrews. A Broadway revival followed in 2018 and received a Tony Awards nomination, and won three awards for “Outstanding Revival of a Musical”.

Showbiz Christchurch is delighted to bring a stunning new production of this “musical of all musicals” back to Christchurch in 2020. 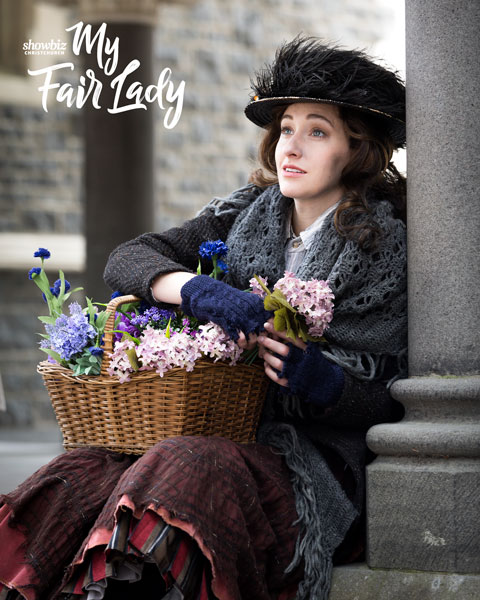 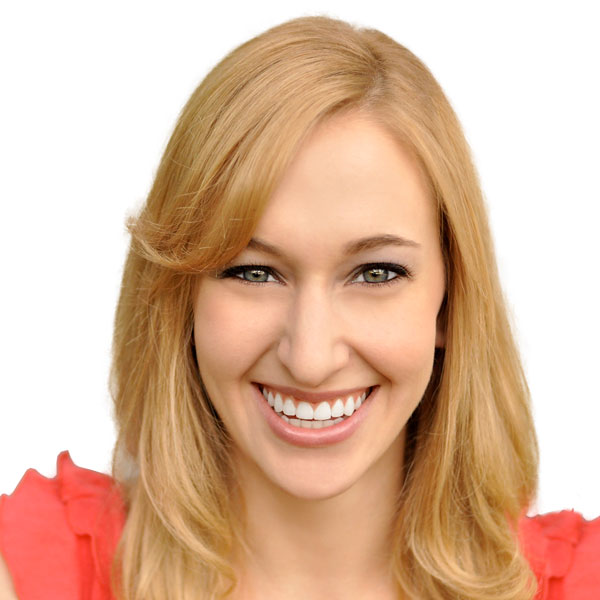 Kira is originally from the USA, where she attended the Orange County High School of the Arts and went on to receive her B.F.A. in Theatre Arts from Stephens College. Since graduating, she worked and toured regionally around the United States before moving to New Zealand in 2015. She has had the pleasure of performing with Tony Award winner Alice Ripley (Next to Normal) and Tony nominee Susan Egan (Beauty and the Beast).

She has performed with Showbiz in Les Miserables as Fantine, Wicked as Nessarose, and as a featured soloist in An Evening of Rodgers and Hammerstein Classics and Broadway Hitmen.

Kira is a proud member of Actors’ Equity Association and the Screen Actors Guild. 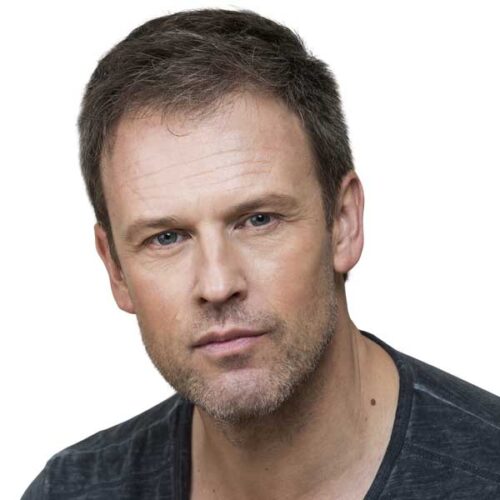 Roy has worked extensively in all performance mediums, across Australasia and Asia and had his work seen throughout North America, Europe and the United Kingdom. He’s a regular at The Court Theatre and has also performed with Auckland Theatre Company, Silo Theatre and the Fortune.

My Fair Lady is Roy’s second production with Showbiz Christchurch.

A graduate of the Guildhall School of Music and Drama London, Peter has a varied background in classical music, opera and musical theatre.

For Showbiz Christchurch his previous roles include Into The Woods, Les Misérables, Disney’s Beauty and the Beast, Joseph and the Amazing Technicolor Dreamcoat, Cats, The Phantom of the Opera and Mamma Mia!

James graduated in 2013 from the National Academy of Singing and Dramatic Art with a Bachelor of Performing Arts (Music Theatre).

At 13 years of age, James was forced by his mother to be in the school production of Les Misérables. He had the time of his life and this paved the way for his future.

James also attended the Christchurch Musical Theatre Summer School in 2014 and 2016, gaining in-depth tutelage from legends such as Sutton Foster and Andrea Burns.

Ian became addicted to theatre when he made the transition from brass musician to acting in a production of Seasons Greetings at Canterbury Repertory Theatre. Thereafter, he performed in numerous productions with Elmwood Players, Harlequin Players Christchurch, Riccarton and Rangiora Players.

Ian worked with Top Dog Theatre in West, Bouncers and four Summer Shakespeare productions including Much Ado About Nothing and Twelfth Night.

Ian’s other performance credits include The Sound of Music, Music Man, Brassed Off, and the Showbiz Christchurch productions of The Full Monty, Monty Python’s Spamalot and Sister Act. His most recent performances include The Vicar of Dibley and the role of Prime Minister in Yes, Prime Minister with the Canterbury Repertory.

Jane’s first role was playing the Scarecrow in The Wizard of Oz at the age of 10 when her love for the theatre began.

She graduated from the National Academy of Singing and Dramatic Art in 1995 with a Diploma in Performance Art and has been involved in a wide variety of performance projects since then, in various parts of the world.

Jane returned to New Zealand in 2001 to raise a family and became a secondary Drama and English teacher. She has been a busy marriage celebrant in Canterbury for the last 10 years and is now a celebrant trainer for The Celebrants Training College.

She returned to the stage for her first musical in 15 years in 2017, performing as Baroness Schraeder in North Canterbury Musical Society’s sell-out season of The Sound of Music, followed by roles in Company later the same year, Jekyll and Hyde in 2018 and Dirty Rotten Scoundrels in 2019.

My Fair Lady is her first production with Showbiz Christchurch.

Ann has had over 30 years experience in the theatre, wearing many hats, from acting and directing to costume design and construction, set design and stage management.  Over the years she has worked for Blenheim Operatic, St Joseph’s Light Operatic, Elmwood and Riccarton Players, Repertory Theatre and Canterbury Children’s Theatre.  Her favourites are always the musicals especially The King & I, Fiddler on the Roof and Oliver!

Ann has an ATCL in Speech and Drama from Trinity College. More recently she has worked on smaller productions tailored for schools and churches. Ann’s latest venture into the arts was as Musical Director for a local community choir, a position she enjoyed for three years.

My Fair Lady in Ann’s first production for Showbiz and she will be performing alongside her daughter, Anna Henderson, for the first time in 26 years.

Anna has been involved with performing arts for over 30 years.

She fell in love with musical theatre as a teenager and took leading roles in Fiddler on the Roof and Oliver. This passion for the performing arts led to a job with Create School of Arts in Christchurch as a dance tutor, choreographer and singing tutor. She was creative director for the school’s final production The Prince of Egypt in 2013. She has also directed the Emmanuel Christian School’s annual musical production since 2011 where she teaches singing.

Anna has represented New Zealand in Latin American Dance in Australia and England and was employed as a dance teacher in Melbourne performing in and choreographing many shows, eventually touring Victoria with the Macedonian Theatre Company.

Anna has trained as a classical singer including one year at the Sydney Conservatorium of Music and has represented New Zealand in a Youth Choir at the International Music Festival.  Since 2012 Anna has worked as choreographer and Junior Choir Tutor for the Canterbury School’s Music Festival, taking on the extra role of Stage Manager in 2017, and is part of the production team for Silhouette Studios New Zealand.

In 2017 Anna had the honour of appearing as an extra for the Christchurch season of the Royal New Zealand Ballet’s production of Romeo & Juliet.

My Fair Lady is Anna’s second production with Showbiz Christchurch. 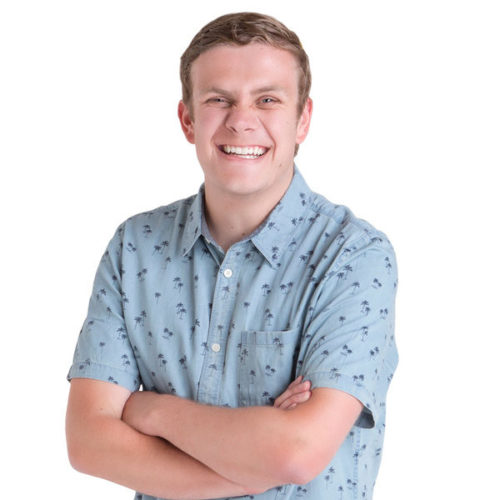 Chris graduated from the New Zealand Broadcasting School with a Bachelor of Broadcasting Communications (Radio) and holds Associate level diplomas (ATCL) in both speech and drama, and musical theatre from the Trinity College of London.

From a very young age, Chris has been involved in many productions both on and off the stage, working as both a performer and director. Some of his acting credits include The Wizard in Wicked (Showbiz Christchurch), Sir Robin in Monty Python’s Spamalot, Lucas in The Addams Family and Sky in Guys & Dolls (Nelson Musical Theatre).

During the weekdays you can hear Chris on the More FM Breakfast Club radio programme, where he is better known as ‘Speedy’.

My Fair Lady is Chris’ fourth production with Showbiz Christchurch in as many years.

Warwick took up ballet relatively late, training at Southern Ballet in Christchurch, then the Victorian College of the Arts School of Dance in Melbourne. He joined postmodern company Danceworks in Australia in 1983 which created new contemporary works. He gave up dance in 1986 to pursue another career.

In 2015 he returned to the stage in The Phantom of the Opera and as Patsy in Monty Python’s Spamalot for Showbiz Christchurch.

Subsequently, for Showbiz Christchurch, he has performed in Hairspray, Evita, Sister Act and Miss Saigon, a featured soloist in Broadway Hitmen and in the chorus for The Music of Andrew Lloyd Webber in Concert.

For North Canterbury Musicals his roles have included Max Detweiler in The Sound of Music, Larry in Company, Sir Danvers Carew in Jekyll & Hyde and, most recently, Andre Thibault in Dirty Rotten Scoundrels.

He has also performed in Madame Butterfly, La Traviata, Carmen, Tosca and The Barber of Seville for NZ Opera.

When he is not performing, Warwick teaches clinical anatomy, physiology, pathology and image interpretation to medical imaging and osteopathy students at Ara Institute of Canterbury.

As an accomplished musical theatre and professional cabaret entertainer, Sarah has performed nationally and internationally for over 30 years in shows, various festivals and corporate events.

Her Showbiz Christchurch credits include Showbiz Christchurch’s Les Miserables, Anything Goes, Chess, 42 Street,  WestEnd to Broadway I, II and III, Joseph and the Amazing Technicolor Dreamcoat, Mamma Mia! and, most recently, as Mother Superior in Sister Act.

Other credits include The Queen and I, Wind in the Willows, Mother Courage, Market Forces, Kiss Me Kate and She Loves Me for The Court Theatre.

Sarah has studied all aspects of dance and has an Advanced Diploma in Highland and National Dance. In 2001 she toured New Zealand in Stetson Production Ltd’s season of Chicago and then went onto play the role of Velma Kelly in Showbiz’s 2008 production of the same musical.

One of her career highlights happened four years ago when Sarah landed a job with Elaine Paige on her 2013 tour of Australia, Asia and New Zealand. Sarah worked as Elaine’s personal dresser, which provided her with a unique experience working closely with one of the biggest international stars of the stage.

Sarah is currently co-director and co-performer of the glamourous professional vocal trio of vintage swing, ‘The Starlets’.