Based on the Touchstone Pictures Motion Picture 'Sister Act; written by Joseph Howard.

Sister Act ‘near close to perfect’

Setting the Scene for Sister Act

The Showbiz Christchurch production will be directed and choreographed by 2015 NZ Arts Laureate winner, Sara Brodie.

It is Philadelphia, Christmas 1977, when wannabe disco diva Deloris Van Cartier witnesses a murder committed by her gangster boyfriend. She is put in protective custody in the one place the cops are sure she won’t be a found: a convent!

Disguised as a nun, under the non de plume Sister Mary Clarence, she finds herself at odds with both the rigid lifestyle of the nuns and their uptight Mother Superior. Using her unique disco moves and singing talent, Deloris inspires the nuns to create a more contemporary choir, and they become the hit of the community.

Word of their success reaches her ex-boyfriend Curtis, who arrives at the convent with his mob to settle their score with Deloris. A battle ensues between the mob and Deloris’s newly found sisterhood of feisty nuns.

Filled with powerful gospel music, outrageous dancing and a truly moving story, Sister Act will leave audiences breathless. A sparkling tribute to the universal power of friendship, Sister Act is reason to REJOICE! 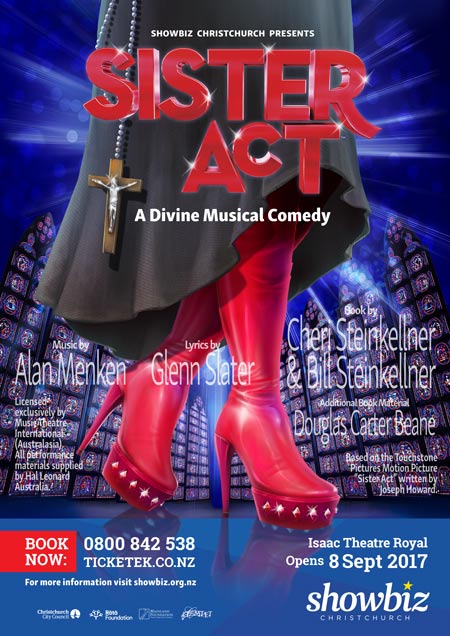